Reflecting on the 'Boundaries?' Conference 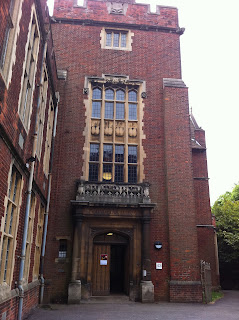 I have recently returned to Edinburgh having attended the 'Boundaries?' postgraduate conference at the University of Bristol's History of Art department. The day-long conference brought together papers reflecting a wide variety of art historical research.

What I particularly enjoyed about the day was that every single paper was interesting and well presented, despite different types of presentation techniques being employed. The first session was on the theme of 'Borders' and consisted of two papers: From 'The Loop' (1997) to 'Sumision (formerly Word of Fire' (2007): Decennial Sketches of 'La Frontera' by Andres Montenegro and The Vanishing Berlin Wall: the representation of an old boundary within a new city by Georgina Webb-Dickin.

Andres' paper focused on the works of Francis Alys and Santiago Serra. I was particularly intrigued by Paradox of Praxis I in which the artist pushed a large block of ice through the streets of the Historical Centre of Mexico City until it had melted. This was an exhausting task which ultimately resulted in 'nothing'. It is strange as both an art historian and as someone who has worked in a gallery environment to consider an artwork which has no tangible result, other than its documentation, especially when the great effort involved in tapestry results in a piece in which the weaver's labour is clear to see. 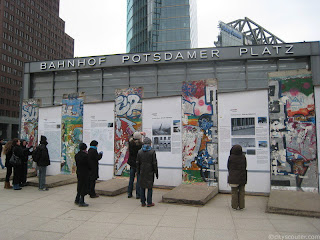 Georgina's paper addressed the different ways in which fragments of the Berlin Wall have been redisplayed or 'fixed' in different sites within Berlin. Many of these are displayed with very little information about their original location or the fact that they have been 'fixed'; the pieces on display in the Potsdamer Platz are sited to look as though they always stood there, however they must have been moved and the street beneath them has been repaved.
My talk on Claire Barclay's quick, slow (2010) was well received and the feedback from delegates will be really useful when I expand the talk for an upcoming event at the Ruthin Craft Centre in Wales (further details to follow soon). The session I took part in was titled 'Material Limits?' and my fellow speaker was Laura Gray presenting The Space In Between: the transgressive nature of ceramics. Not surprisingly there were similarities in both our presentations. We both felt that our research needed to be placed in the context of the ongoing art/craft hierarchy dispute, although refrained from going into detail due to time constraints. We also both made reference to common craft events, such as the COLLECT. Our papers both referenced the movement of a craft 'discipline' into sculpture; this point was picked up in the Prof Stephen Bann's response at the end of the conference, in which he stated that we could consider sculpture 'as a category which has exploded or dissolved', no longer following the traditional restraints as to what sculpture is, or should, be.

All in all, well worth the trip to Bristol!

Posted by Francesca Baseby at 15:35 No comments:

Tapestry & Materiality in Art History (a rather heavy blog!)

As part of my ongoing research, I recently read an article by Malcolm Baker, 'Some Object Histories and the Materiality of the Sculptural Object', published in The Lure of the Object (2004). The publication was the result of a conference held at the Sterling and Francine Clark Institute, Massachusetts, exploring the different nature of the term 'object' in relation to a variety of artistic mediums.

Baker's article focused on 'a disjunction between, on the one hand, the way many spectators view art objects... and, on the other, the way art historians write about these objects.' Baker's argument examined the lack of discussion of the process of making within art historical literature, noting that, if the making process is addressed, it is separate from the writings which discuss the more traditional themes such as the artist's ideas and the object's relation to the culture and society in which it was produced. He proposes that these different elements of an object's nature be discussed together.

This paper brought up many issues which I have been considering throughout my research, and even before when I was working at Dovecot. Although technical art history is a rapidly emerging field, art historical literature on the whole still gives little attention to the materials of artworks and how these effect a viewer's response to them. Someone writing on Rembrandt's paintings might note the looseness of his brushstrokes, but will probably not make a direct connection between this and the painter's long lasting appeal and reputation.

Having spent some time observing people encountering tapestry at Dovecot, there are usually two things which appeal and catch their attention: the design and the material. Often the 'lure' of the tapestry and its weaving process over-ride the usual art historical questions we might ask of an object: 'who made it?', 'what does it depict?', 'how does it relate to other artists' work?'. I'm not saying that tapestries' audiences do not consider such questions, but do believe that for many these come secondary.
For many, I think this stems from the exoticism of tapestry - it is not something which most of the popular encounter on a regular basis and most do not know how it is achieved. Before working at Dovecot, I had no understanding of how a tapestry was woven.

So, how does this all relate to what I am trying to achieve with my own research? For me, producing a full and rich thesis on tapestry needs to involve a combination of traditional art historical research with a knowledge and understanding of how the objects were made and how the were received. Many of Dovecot's tapestries have been woven for specific buildings so to ignore the people who have lived with them would be denying their life after leaving the studio. I also hope to integrate the making process with the 'ideas' process. The weavers at Dovecot, and elsewhere, are not copying an image piece by piece; they are interpreting it and constantly evaluating what they are doing, what colours are being used, and how to continue.
Posted by Francesca Baseby at 13:04 No comments:

This summer a major retrospective of the work of Elizabeth Blackadder will be shown at the National Galleries of Scotland (information here). Dovecot has collaborated with Blackadder on over 30 tapestries spanning 5 centuries; such a productive relationship has come about predominantly due to the level of freedom granted by Blackadder when it comes to the interpretation of her designs. The length of the studio's relationship with such a renowned artist means that the tapestries have witnessed a huge part of Dovecot's history, from the directorship of Archie Brennan, to the workshop's new home in Infirmary Street Baths. 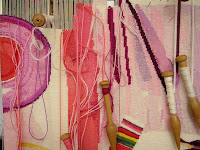 Scale has changed according to commission. One of the largest tapestries woven was in 2004 for the P&O Cruise ship, Arcadia. East West Still Life was over 2m in length and 75cm tall. The design was a collage of painted elements, which Blackadder moved around the composition with weaver Douglas Grierson until a final, coherent design was achieved. The light colour palette of the tapestry is well-suited to a cruise ship and the different textures within the design give the viewer the opportunity to witness the weavers' dexterous handling of colour.

The delicacy of Blackadder's floral painting has also been used to great effect in miniature tapestries: finely woven with precise detailing.

For me, the exhibition in August in the RSA galleries on the Mound will be another opportunity to view one of Blackadder's first tapestries, woven for the Scottish National Gallery of Modern Art in 1967/8. This abstract design is full of clever and extremely challenging pieces of weaving, created by weaver Maureen Hodge. The tapestry is a reflection of the three-dimensional tools which Hodge applied, and still does apply, to her own work outside the studio. Double-weaving, extra warps and diagonal lines make the tapestry well worth seeing, and I would recommend everyone to do so when it is on display.
Posted by Francesca Baseby at 14:17 No comments:

Back from Mount Stuart with lots to think about... 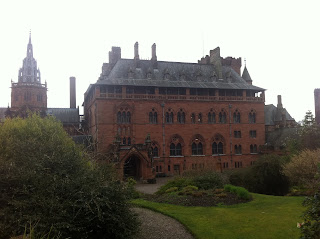 It has been a while since I have blogged - not that I haven't been keeping busy. However, most of my time has been taken up with writing, rather than new research. However, a return trip to the Mount Stuart Archives on the Isle of Bute last week has given me plenty to ponder.

As I have been going through the archives, concentrating on the post-war period, I have come across a number of exhibition invites and catalogues. The variety of styles and forms they come in, made me think how exhibition literature is a reflection of the context in which they are produced.

One of the earliest was from 1949, an invitation to the private view of 'RECENT TAPESTRIES by the Edinburgh Tapestry Company' at the Arts Council Gallery, London. The card is small and modest - perhaps a reflection of the on-going poor financial climate. The card is, however, elegant and printed on high-quality card. The intended recipients included potential clients, who could afford to spend a significant amount on an artist-designed tapestry. 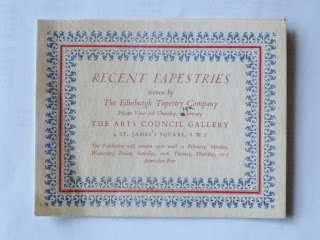 The next card is for an exhibition of similar content displayed later in the same year, this time in Edinburgh at Gladstone's Land. The change of public from English to Scottish is clear in the description of 'Scottish Artist-Weavers'. The leaflet also gives more detail regarding the exhibition, including a list of artists involved. The decisions regaring how much information to include in publicity of this kind, and how to lay it out, is one which still occupies galleries and museums today. A Private View invitation show draw its recipient in, encourage them to attend the exhibition without loosing all sense of intrigue. 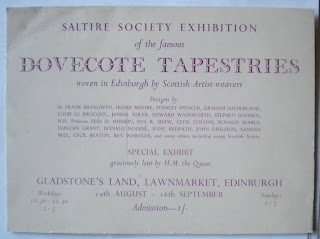 The invitation for an exhibition the following year, this time in Glasgow, is again different. The invite is considerably simplified with no colour print. What I could not deduce from these items was who made the decision regarding final design: weaver, director or gallery staff? As well as being beautifully crafted objects, these archives provide essential information regarding the exhibitions which Dovecot took part in. To illustrate how well they represent their cultural climate, I'll finished with an outstanding invitation from just a decade later: