In the 1950s, under the influence of Harry Jefferson Barnes (Deputy Director of Glasgow School of Art, Dovecot's production expanded. Designer Robert Stewart (Head of School of Textiles, Glasgow School of Art) was recruited to start designing and producing tiles, printed textiles, placemats. He was assisted in this by a former student, Margaret Stewart (no relation).

The tiles were particularly attractive commercially as they had no purchase tax. Robert and Margaret designed a broad range of tiles, often in coordinating sets, which could be used on walls, fireplaces, or as table ware. The Edinburgh Tapestry Company Archives at Mount Stuart include a brochure of tile designs, showing each pattern in a number of different colourways, from which clients could place orders. 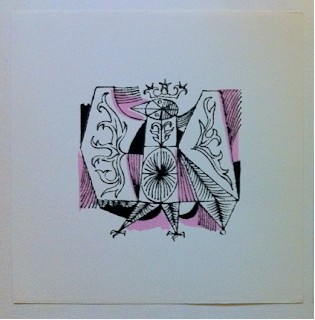 Placemats were produced in a number of materials. Robert Stewart developed 'blotting paper' placemats which could be used a number of times and then disposed of. These were designed with bright colours and strong graphic designs. 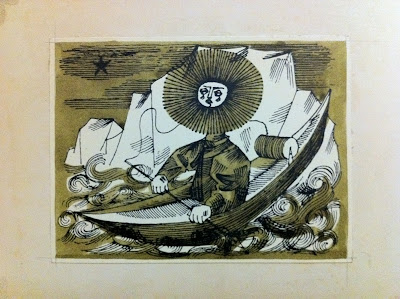 Barnes was keen to expand these into tourist souvenirs, and a collection of topographical mats were produced an packaged in branded Dovecot sleeves: 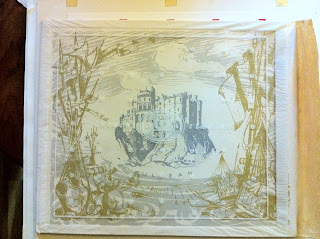 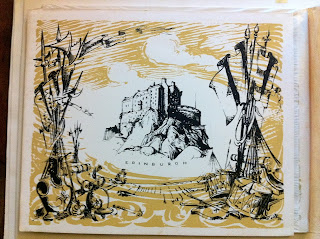 Dovecot is clearly a product of the people who have been involved in its running throughout it history. Harry Jefferson Barnes and John Noble, with their involvement in the Scottish Crafts Council, realised that tapestries alone were not sufficient to keep the company solvent. Their solution was to create smaller, more affordable, items, produced along the same principles of good design and craftsmanship which the studio had always followed.
Posted by Francesca Baseby at 11:06 2 comments:

I have recently spent some time looking through the papers of Sax Shaw, whose family kindly allowed me access. Shaw became Artistic Director of Dovecot n the early 1950s, having designed two tapestries The Lion and the Oak (1948) and Fighting Cocks (1950). Though Sax's involvement with the studio was relatively short-lived, he is of particular interest to me due to his dual interest in stained glass and tapestry.
Despite their different textures, tapestry and stained glass have much in common. Both make use of concentrated colour and, unlike painting or drawing, involve a process in which the object's design is an inherent part of the object, built up piece by piece. The difference, of course, is that the glass which makes up a coloured window often has decoration applied to it as well. I am also interested in the unique atmospheric effects which tapestry and stained glass have on their locations. A tapestry, dependent on its size, can alter the acoustics of the room it inhabits. Stained glass goes even further than this - with sunlight or artificial light shining through, we the viewer can experience the fall of light on our bodies.
Having spent 4 days at the home of Shaw's widow, I now have the task of working out what to do next. The privileged time I spent with the uncatalogued 'archive' has resulted in pages and pages of notes, and hundreds of record photographs. What to do with it all?! So I have began the slow process of sorting, reading and extracting, and I'll be sure to blog when I've come up with some ideas. 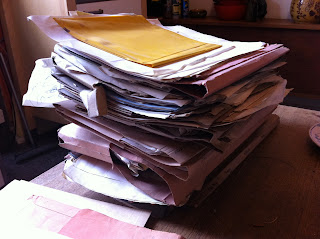 Posted by Francesca Baseby at 21:23 No comments:

Whilst at the Victoria & Albert Museum recently, I spotted this!
From a distance you could tell it was some form of needlework or weaving, but I was completely shocked to discover it is in fact woven tapestry.

It was woven in 1877 at the Royal Windsor Tapestry Manufactory and won a gold medal at the Paris International Exhibition in 1878. For me, as well as being technically exquisite, it is representative of the trend of copying paintings directly into tapestry, a method which is often cited as the medium's downfall before it's renaissance in 1940s France. The original painting was by Heinrich von Angeli (Hungary, 1840-1925). The work was commissioned by furniture-makers Gillow & Co, London who founded the tapestry workshop. For more information on the V&A website, please click here.
Posted by Francesca Baseby at 13:15 No comments: