The first part of this double-post looked at the inclusion of artist's signatures in tapestry designs and their subsequent weavings. This post will examine the inclusion of weavers' initials in Dovecot's practice.


Lord of the Hunt was the first tapestry to be completed at the studio, woven from 1912 to 1924 and interrupted by the First World War. It was the war that led to the poignant inclusion of the initials of master weavers John Glassbrook and Gordon Berry. Their initials are set behind a bobbin and shears on the lower border of the tapestry; not only do the commemorate the weavers, they mark the extent of weaving that had been achieved when war was declared.

Initials continued to be included on the front of tapestries up to 1939. The images above show the Head Weaver David Lindsay Anderson's initials on the lower border of The Admirable Crichton, with the weavers initials above the top border.

After the Second World War the practice remained the same, but at some point initials were moved to the back of tapestries. This was not a sudden change but happened gradually. The images below show the weavers' initials and Dovecot symbol (a subject for another blog post!) on the selvedge that is turned back on the tapestry. 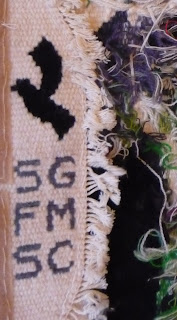 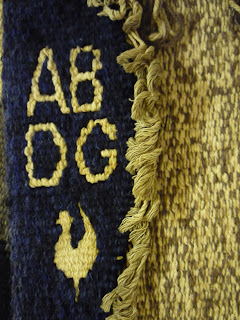 As a researcher these initial serve a practical purpose. The archival information about Dovecot's history is patchy at best. Studio weavers are at risk of becoming anonymous if their names are not recorded in surviving archives or included on the physical tapestry. Some Dovecot tapestries do not include any initials!

In recent years the studio has been at pains to ensure that this does not happen in the future. There remain some projects that do not have an appropriate space for initials, such as quick, slow illustrated in the last post. However, in most cases it is possible, as in these small Peter Blake designed tapestries woven by Naomi Robertson - her initials are on the side of the mounts: 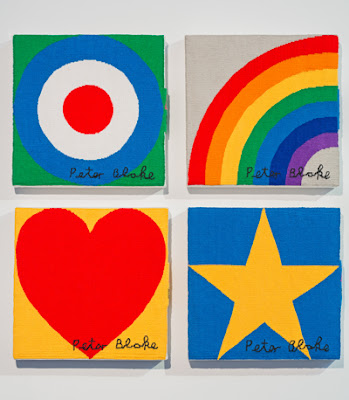 Posted by Francesca Baseby at 10:00 No comments:

Whilst researching the 1950s at Dovecot, under the Directorship of Harry Jefferson Barnes and John Noble, I came across correspondence relating to the inclusion of an artist-designer's signature in a tapestry. The artist in question was Nadia Benois. On 5 November 1955 Benois wrote to Sax Shaw (Dovecot's Artistic Director) enclosing a copy of her signature. The studio was weaving a tapestry to one of her designs, Night and Day, and she expected her signature to be included on the front.

Just a few months earlier, on 7 August, Director John Noble had written the following to Shaw about Benois' tapestry:

I am entirely in favour of tapestries being marked to show designers and weavers. It is an old tradition and a good one, interesting for posterity. But I am not sure about the wisdom of signing them on the front. I feel that it suggests 'wool pictures' rather than tapestry and that the signature is apt to get in the way of the design to a much greater extent that it does in the painting.

These letters, found in the private archive of the Shaw family, illustrates that there was no 'correct' way of incorporating an artist's signature into a tapestry design - it was constantly up for debate. I thought it would be a good idea, therefore, to survey some examples from Dovecot's history and explore the debate from 1945 to the present day.


After the Second World War, the Directors of Dovecot (then called the Edinburgh Tapestry Company), decided to invite famous contemporary artists to submit designs to the studio; the Directors then selected a number of them to be woven. The Directors (all members of the Bute family) were inspired by activities in France but also encouraged by the Council of Industrial Design. It was believed that collaborating with such artists would revitalise tapestry weaving, boost its profile and make the works easier to exhibit and sell. The name of the artist was an essential part of the marketing of the tapestries.

When Noble and Barnes became Directors in 1954 they decided to move away from using external artists as tapestry designers. Instead, they employed Sax Shaw as an in-house Artistic Director and tapestry designer. It was hoped that this change would save money (from artist fees) and make the tapestries more salable in a world that was increasingly aware of 'design' in the home. However, Shaw continued to include signatures on the tapestries he designed and, of course, in the Benois tapestry discussed above.

The practice of including a tapestry designer's signature has continued to the present day. However it is not a consistent feature of tapestries at Dovecot. From the 1960s onwards signatures have only been included where necessary (e.g. if the artist or patron insists) or if it is able to fit comfortable within the design. Here are a couple of examples:

There are some obvious examples of tapestries that have no appropriate space for a signature. This is especially the case when the tapestry is not meant as a simple wall hanging:

So far in this discussion of signatures the weavers have been absent. The second installment of this blog 'Signed Tapestries (part 2): Weavers' will examine Dovecot's inclusion of weavers' initials. Here's a taster of what's to come: 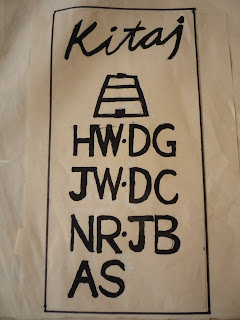 Posted by Francesca Baseby at 12:21 No comments: