Having discussed the use of the term 'tapestry' in reference to Jacquard weavings in part 1, this blog post is concerned with embroidery. Dovecot has had many visitors who have come to the studio with the expectation that the tapestry the 'weavers' are carrying out is in fact sewing - they are often surprised to be met with large looms and weaving. This stems from the popularity of needlepoint kits which are often described as 'tapestry' kits (click here for examples).

The use of word tapestry to refer to needlework does not only occur in the world of hobby-crafts. The two terms have a longer association thanks to the labelling of the Bayeux Tapestry. The etymology of the word tapestry is grounded its translation as 'heavy fabric'. Though of considerable length (almost 70m or 230ft) the fabric on which the story of the Norman conquest of England is actually quite thin and light. Indeed, Santina M Levey has commented on the plain nature of the materials of the Bayeux Tapestry: linen and wool (5000 Years of Textiles, p.200). 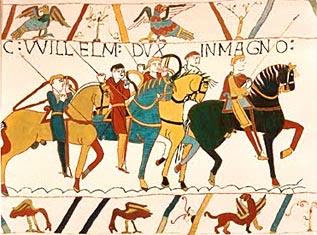 The Bayeux Tapestry is embroidery, a technique which the following entries show is very different to woven tapestry:

Embroidery Created with a threaded needle, embroidery is used to embellish a fabric ground. It can be done in a number of ways, using many types of stitches.
(Elena Phipps Looking at Textiles - a guide to technical terms,  Getty Publications, 2011)

Tapestry A weaving technique that differs from other weaving in that the weft threads do not pass all the way across the warp threads from selvedge to selvedge but only as far as colour is needed for the design. Characteristic small slits can be left where the colours change.

('Glossary' in Barty Philips Tapestry, Phaidon, 2000)
The two are clearly very different in structure and manufacture and this is reflected in academic books on textiles. In 5000 Years of Textiles (edited by Jennifer Harris, British Museum Press, 2010) 'Embroidery', 'Weaving' and 'Tapestry' are given separate sections in the introductory chapter 'A Survey of Textile Techniques'. If this is the case, why is tapestry sometimes used to describe embroidery?

I think that the description of the Bayeux embroidery as a tapestry stems from the story-telling tradition of woven tapestry cycles. Many of the most famous Medieval and Renaissance tapestries are series of works which tell a story. These include the History of the Trojan War (15th century) which was woven numerous times from the same cartoons and the Acts of the Apostles designed by Raphael for the Sistine Chapel, Rome. Tom Campbell has written of the popularity of such didactic tapestries. When the Duke of Burgundy visited Paris in 1461, he hung his tapestries of the History of Gideon and Alexander the Great on the facade of the Hotel d'Artois where he was staying - Parisians 'queued night and day' to see them (5000 Years of Textiles, p.189).

The effective impact of the Bayeux Tapestry's story, displayed horizontically in chronological order has been adopted by contemporary projects which aim teach aspects of Scotland's history whilst making use of the highly skilled embroiderers who occupy the country. The first of these was the Prestonpans Tapestry. Made from 104 metre wide panels, the work tells the story of Bonnie Prince Charlie's journey from to Scotland, culminating in victory at the Battle of Prestonpans. The website for the project contains a wealth of information covering the design, historical research and even individual biographies of the embroiderers involved. 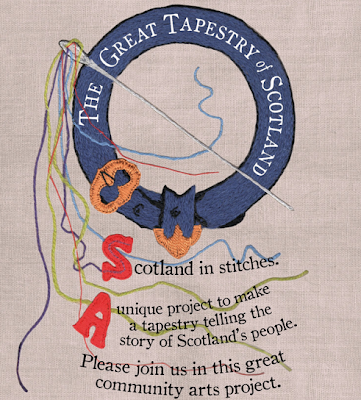 The success of the Prestonpans Tapestry has led to a second project The Great Tapestry of Scotland. For updates on the project, you can follow them on twitter.

It's all a bit confusing, no? It would be easy for someone to ask 'Why not just wipe the slate clean, and insist that everyone uses the correct technical term?' But to do that, would be to wipe away the history and journey that the word 'tapestry' has been on through the years. These blog posts have also shown that the use of 'tapestry' is subjective and it would be arrogant to try to impress one's own ideas upon other makers and thinkers. The weavers at Flanders Tapestry consider their work 'tapestry' whereas the Dovecot weavers would consider their work 'true' tapestry. This does not mean that it should be used idly or taken advantage of. As I concluded in the part 1 of this post, it is vital that the technical terminology of any medium (jacquard, tapestry, embroidery) is used in conjunction with its description of tapestry. The only solution I have come up with is to differentiate them with the following: Jacquard weaving, woven tapestry and embroidered tapestry.

PS. A Victorian replica of the Bayeux Tapestry can be seen at Reading Museum, which was the focus of this blog post.
Posted by Francesca Baseby at 13:32 1 comment:

What is tapestry? A current exhibition of works by Grayson Perry at the Victoria Miro Gallery, The Vanity of Small Differences, is described as containing 'a series of six tapestries' on its website. These six weavings are explored in depth in a three-part Channel 4 documentary In The Best Possible Taste, presented and written by Perry himself. On reading about the exhibition and programme I immediately thought: Is it really tapestry?

The term tapestry has a confusing, multitude of uses in modern language. Here are some descriptions:

A weaving technique that differs from other weaving in that the weft threads do not pass all the way across the warp threads from selvedge to selvedge but only as far as colour is needed for the design. Characteristic small slits can be left where the colours change.
('Glossary' in Barty Philips Tapestry, Phaidon, 2000)

As an object, a tapestry is usually (but not exclusively) a large, pictorial wall-hanging woven in tapestry weave.
(Elena Phipps Looking at Textiles - a guide to technical terms,  Getty Publications, 2011)

Technique of weaving discontinuous weft threads into an undyed warp thread to form a pictorial or decorative design. The term also denotes wall hangings made by this technique, most notably the pictorial wall hangings popular in Europe from the 14th century.
(Grove Art Online, accessed 18/06/12)

A hand-woven fabric, usually of silk or wool, with a non-repetitive pattern which is woven during the manufacture. The word is often applied mistakenly to other textiles used for wall-hangings and upholstery.
(The Concise Oxford Dictionary of Art Terms, accessed 18/06/12)

It is quite clear from these academic sources that tapestry, or tapestry weaving, is the method practiced at studios such as Dovecot, Gobelins and West Dean: a hand-woven piece of weaving which is distinctive from cloth weaving by the weft which does not always travel across the width of the weaving.

On watching the Channel 4 documentary it was instantly apparent that these were not tapestries in these terms, but Jacquard weavings. Jacquard weaving, or the Jacquard loom, is described as follows:

A loom introduced in 1801 that uses a punch-card system. It produces fine cloth with tapestry-like blocks of colour much faster than hand-worked looms.
('Glossary' in Barty Philips Tapestry, Phaidon, 2000)

A Jacquard loom, or more precisely, the jacquard attachment to a loom, is a mechanism to automate the raising and lowering of individual warp threads in order to weave complex designs, a task that was previously done laboriously by hand.
(Elena Phipps Looking at Textiles - a guide to technical terms,  Getty Publications, 2011)

A mechanical loom, invented by Joseph Marie Jacquard in 1801, that simplifies the process of manufacturing textiles with complex patterns such as brocade, damask and matelasse.
('Glossary' in Tapestry, Black Dog Books, 2011)

In none of these definitions is a Jacquard weaving described as a tapestry. Why do many describe it as such? The answer lies predominantly in the etymology of the word tapestry. The term tapisserie (tapestry) is first found in 15th Century French and was associated with tapisser (to cover with heavy fabric) and tapis (heavy fabric). This terminology can be traced back to the Classical Greek word tapes (tapestry or heavy fabric). The etymology of the word has meant that jacquard producers, such as Flanders Tapestry, have defined tapestry as 'a thick textile fabric in which colored weft threads are woven into fixed warp threads to form an image'. Though this is not an incorrect interpretation of the word tapestry, it is evident from the source above that in today's language it means a more specific type of hand production.

To confuse things even more the word tapis in modern French means rug or carpet!

What does it all mean and how do we move on? Essentially, there is no 'ultimate' dictionary to which all producers of weavings adhere. I once asked a tapestry weaver if it would be possible to create a one-stop glossary of tapestry weaving terms and he said it would be impossible, as weavers from different generations and regions often use different technical terms for the same thing. For me, the use of the word tapestry in either of the cases above (tapestry weaving or jacquard weaving) is no problem as long as information on its production is available. This is essential for the education of the general public and academics on the differences between the two methods of manufacture. Describing a jacquard weaving as a tapestry, with no reference to its mechanical nature (as in the Victoria Miro gallery exhibition information) is doing the world of a textiles a mis-service.

Next time... on the use of the word tapestry to describe embroidery.
Posted by Francesca Baseby at 15:12 No comments:

It's been all quiet on the blog as I am battling an illness at the moment - there's not much new research to blog about! However, before I got ill I was lucky enough to buy a ticket for the National Museum of Scotland's RBS Museum Lates Night in Wonderland. These occasional Friday evening events at the Museum are for adults only and are designed as an opportunity to experience the building and collections in a different way. It was a fantastic evening - I fully support children in museums but it was really special having a child-free opportunity to enjoy the galleries.

All of the photos are by my talented other half, Calum TW, and you can see more of his photography here and his graphic design work here. 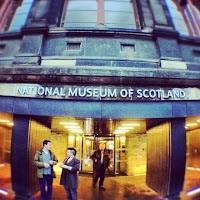 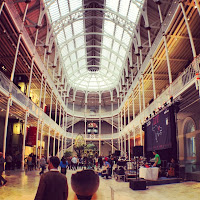 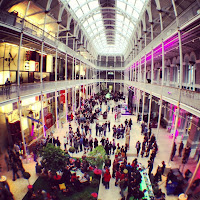 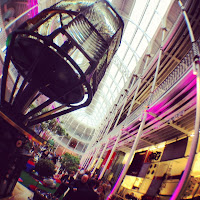 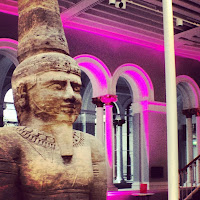 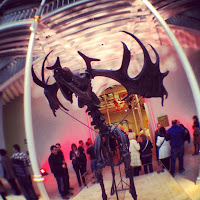 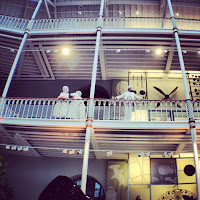 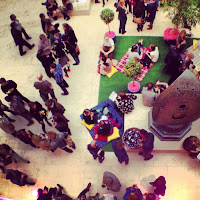 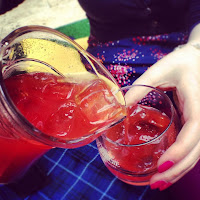 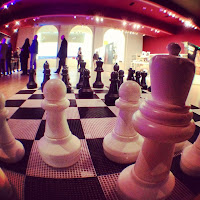 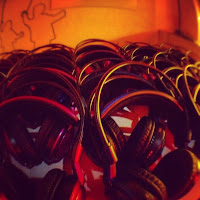 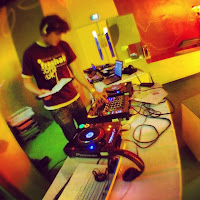 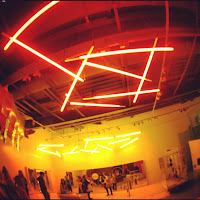 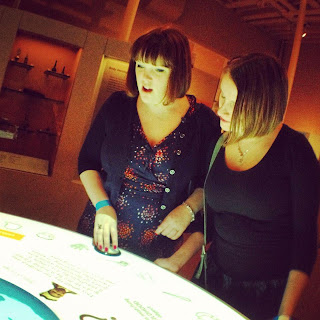 The evening was truly magical. Highlights for us were drinking cocktails on a picnic blanket in the great hall (you can see us in the middle of the 8th picture!) and the silent disco in the Imagine gallery.
Posted by Francesca Baseby at 15:59 No comments: