Day two was just as jam-packed with fascinating papers so I have picked out some of the highlights.

I was captivated by Sharon Blakey (MMU) and Liz Mitchell's (MAG) presentation on their collaborative work on the Mary Greg collection at Manchester Art Gallery for their project Mary, Mary Quite Contrary. Mary Greg donated her collection of 'heirlooms and handicrafts' to the gallery in 1922 where it has remained in storage for decades, uncatalogued and unloved. The collection consists of everyday objects and paraphernalia from Greg's life and represents the society in which she lived. Inspired by John Ruskin, she intended the collection to be of benefit to the public, especially the working classes. Their progress has been charted on their fabulous blog. 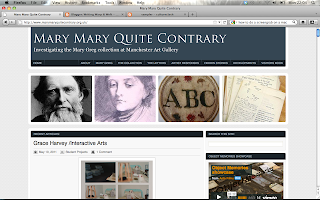 On day 1 a number of us had been discussing the pros and cons of blogs. As you can tell, I quite enjoy mine and many of the teachers had made blogging part of the curriculum for their students. But what also became clear was the number of teachers/makers who did not use it, for a number of reasons: it interrupted their train of thought, they did not want to share ideas before they had time to germinate, a fear of plagiarism and a feeling that they already wrote enough about their work. The pairings project at MMU had originally had a blog for all participants to communicate with, but it proved to be unsuccessful to its technicalities and the feeling from participants that it was an unnecessary addition to the communication they were already having with their partners (by email, phone or face to face). In the case of the Mary Greg collection, however, it was a really successful way to introduce the public to live research and allow them to view images of the objects.

Avni Varia and Cindy Gould spoke on the Savarkundla Project, in the Gujarat region of India. The project teaches local women how to create textile pieces which they can then sell, creating a sustainable economic future for them and their families. 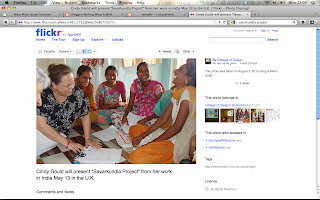 The inter-cultural theme was continued with a presentation by the founders of the HAT Project, Jeremy Theophilus and Barney Hare Duke. 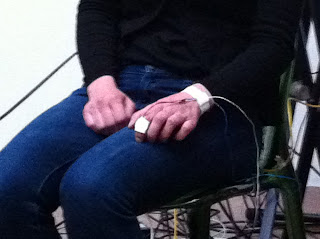 The day was finished by an early-evening performance by sampler-cultureclash. Consisting of a collective of DJs, embroiderers, sound artists, textile designers and many more, they come together to explore the relationship between sound and textiles, using the common theme of the 'sampler' as a starting point. One of the performers had sensors attached to her finger and embroidery frame whilst she was sewing, one of the many sounds added to the DJ's samples as the music developed. It was an enveloping and absorbing performance. 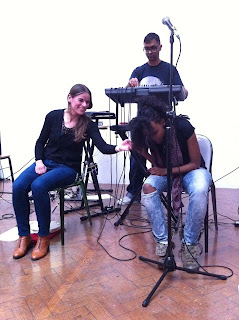 So, what does all this have to do with tapestry? What became evident during the conference is that many practitioners encounter the same themes and issue which I have encountered during my research into Dovecot Studios: the challenges and benefits for interdisciplinary collaboration, the issue of receiving credit for your work and skill and the importance of thinking as well as doing. For me, the conference was especially valuable as an opportunity to spend time with people for whom 'process' is a major part of their work and research. In an art history department, such as Edinburgh, it is all too easy to become fixated on the object without a thorough investigation of the processes involved in its making. Two days with 50 makers is enough to persuade you otherwise.
Posted by Francesca Baseby at 22:35 No comments: 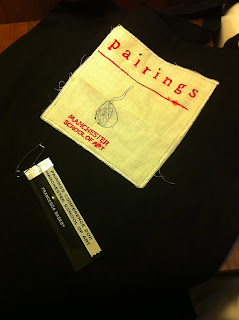 Please forgive the length of this post! The pairings conference at MMU was a brilliant experience and I have tried my best here to not only give my thoughts on a selection of the presentations, but also bring up some of the issues regarding collaboration which we discussed outside the lecture theatre.

The key note speech on day one was delivered by Dr Alke Groppel-Wegener of Staffordshire University. Alke had been invited to be the 'biographer' of the Pairings project. The project was formed to 'pair up' practitioners across disciplines, from both within and outside Manchester School of Art; having aimed for 6-8 pairs, they eventually had 18 on their hands! The only deadline was an exhibition to be held in the gallery of MMU Special Collections, with the intention that the exhibition should be process-based rather than object-based. The finished exhibition, however, resulted in the opposite which shows just how much practitioners, however interested in process, as driven towards a finished, tangible result.

Jason Cleverly, of University College Falmouth, gave a hilarious presentation about a recent project he carried out for the Dr Johnson's House in London. Rather than writing about it here, click here for a link to the project's website.

On a similar vein to the Pairings Project, staff and students at the University of the West of England had developed the Project Dialogue. Barbara Hawkins gave a thought-provoking presentation on the project's aim to experiment with breaking boundaries between the art, design and science. I was particularly interested in her point about the humanities' uses of science: rather than going to science directly for  resources, we bypass them and instead refer to social commentators on science.

The conference was interspersed with sessions run by the MAP Consortium designed to get us thinking about the theme of collaboration. Interventions of this type might not be everyone's cup of tea but for me they really added to the dynamic of the conference and encouraged me to think through the themes discussed in the papers. During the break periods MAP had set up a number of activities for delegates to do. My favourite was a pair of chairs in a square for people to arrange in a form which they felt represented collaboration. Mine was pretty straight-forward: 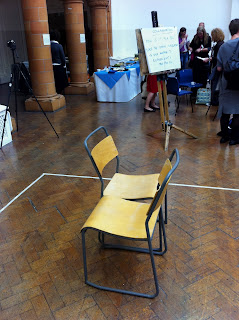 Glen Adamson and Alice Kettle's was rather more active:

In the afternoon we were put into threes by the selection of toy animals (picked a hippo) and in groups continued to study the theme of collaborative research and practice. One issue which concerned us was 'credit' - who takes credit for the research? This issue came up during the questions after my paper - people were interested to know if the weavers were always credited for the tapestries they wove. Today, the weavers' names are always recorded and their initials woven into the tapestry, however this wasn't always the case and for the majority of tapestries woven at Dovecot we have no record of their weavers. Outsourcing is a hot topic at the moment and we discussed projects where people had been paid for their skills but not noted when the finished product was unveiled - who is 'in the wrong'? For me, it is a matter of respect to thank and note the people who have helped you in your work - perhaps I'm being picky about manners but even if you have paid someone for their service, acknowledging their efforts is part of thanking them and is also necessary to remain honest about the work you are showing.
Posted by Francesca Baseby at 21:48 No comments: