Joyce Conwy Evans - ever heard of her? No? Even though she has designed over 18 tapestries and rugs for Dovecot? Thought not. Joyce is an elusive designer, a mystery for many, whose career began well before the internet made everything instantly available to view.

In November I visited Joyce at her studio in London. There we spent over an hour and a half chatting about everything from Kindles to knitting, with some serious chat about tapestries in between. Joyce's rich colourful style, combined with a deep understanding of what it means to design tapestry, has led me to include her as one of my case studies for my thesis. Joyce's training began with a National Diploma in embroidery at Bromley College. From there she went to the Royal College of Art, London, studying Interior Design as there was no embroidery department at that time. Before setting up her own embroidery and design practice in 1974, she worked for Sir Hugh Casson's architectural practice.

Joyce's first tapestry design commission came from the Hilton hotel group, to design a tapestry for their new Park Lane Hotel. The tapestry was to be 20 feet in height - by Joyce's own admission this was her first encounter with tapestry weaving.


The 1960s were busy time for Joyce and Dovecot (then officially known as the Edinburgh Tapestry Company). The Hilton commission was followed a few years later by The Elements for Eastbourne Water Works and chair upholstery for the Worshipful Company of Furniture Makers.

At the time of The Elements, Joyce's style was very similar to what it had been in the Hilton tapestry, and both hangings were woven quite flatly. In 1967 the working relationship with Dovecot became more experimental. Joyce commissioned a small tapestry, Woodthorpe, for an exhibition she was having at Charterhouse, Godalming. The tapestry design was very complex with layers of motifs, but there was only a short time to weave it. The solution was that the main design was woven by Dovecot, and the rest was embroidered on by staff and students at Edinburgh College of Art.

The other development came in the form of a commission from the Royal College of Art for robe edgings and a trumpet tabard. As with Woodthorpe, these necessitated a combination of weaving and embroidery. The tapestry parts were woven in Edinburgh, then Joyce and her colleagues applied them to the robes, using embroidery and ribbon to conceal the joins. Joyce was amazed when Archie came up with the suggestion of have two 6-inch detachable parts at the each end of the edging, so that it could be altered depending on the height of its wearer. Both works included a lot of gold, silver and metallic threads and Joyce remembers that the tabard was especially hard on weaver Harry Wright's fingers as it was almost entirely metal, and two sides had to be woven.

As Joyce became more involved with Dovecot, her designs became increasingly three-dimensional and geometric, driven by her deepening understanding of tapestry weaving and encouraged by Archie Brennan. A number of commissions were for religious purposes. In 1981 she designed an altar frontal for the Trinity Chapel of Canterbury Cathedral. Her interest in geometry is evident in the section of design illustrated here:


The Trinity Chapel is dedicated to recent Saints and Martyrs, hence the wording which you can see above. Rather than include heraldic motifs and lettering in an instantly recogniseable manner, Joyce prefers to layer and disguise it, encouraging people to pause in front of the work and "work at it".
The Trinity Chapel altar frontal is still in place and available to see when you visit the cathedral. Another altar frontal which can be visited is that in the Memorial Chapel of King's College Chapel, Cambridge. In 1968 Joyce was commissioned to design an altar frontal for the main chapel and vestments. The following year she designed the altar frontal for the Memorial Chapel. This is the only item on permanent view. If you can't get to Cambridge, they have a fantastic virtual tour on their website and through it you can have a 360 degree tour of the chapel. Here's a screen grab of the tapestry:
Of course, Joyce's career is not just about tapestries. As well as interior design work, including The Inn at Little Washington and The Athenaeum, London, she has undertaken costume and set design work for Charterhouse School, Sadler's Wells and Glyndebourne.
Joyce continues to work and teach and finally made it onto the internet in 2011 due to the inclusion of work by one of her students in the Power of Making exhibition at the V&A. You can see an article about his work here.

The Wellcome Collection, Stained Glass, a Lego Tree and some Chocolate Coins

Between eating and drinking, there was a chance for some cultural activities during the festive period. A few days before Christmas, Mum and I went to London to see Matthew Bourne's Nutcracker at Sadler's Wells. Needless to say, it was phenomenal. On the way we went to the Wellcome Collection - it was our first visit, and somewhere we had both been wanting to go to. The exhibits were brilliant, which is why I have very few images to show. I loved the different display techniques used for each section. The Medicine Now section, which explores medicine since Henry Wellcome's death in 1936 to the present day, used white sterile looking units and bright lighting to display items in different ways, highlighting the nature of science and medicine today. The units had plenty of interactive elements, as well as interpretation which was in-depth and technical enough for visitors such as my Mum, a speech and language therapist.

Walking into the Medicine Man display area was like stepping back in time, to the world of Henry Wellcome (1853-1936) himself. The room was clad in wood panelling and the lights were low.

On entering the gallery, we were confronted with a vitrine-like wall, displaying the various glass vessels collected by Wellcome. This was the first of many displays to exhibit the connections between science and 'craft'. This was not an explicit message, but was something which I picked up as I made my way around the room. Without the skill of glass blowers and manufacturers, such unique objects would not have been available to medical men and women. Panels of glass were interrupted by drawers and doors, interactive elements which both entertained and provided protection to light-sensitive objects.

There were two other objects which for me showed the link between media we consider craft today, and medicine. First was the Infant Indentification Kit made in the USA c.1925. Today, hospitals use plastic bracelets or ankelets to identify mothers with their babies, but this kit was provided letters and numbers which maternity wards could string together to form identification 'jewellery'.

I love this Claxton Ear Cap shown below - though imagine there were hundreds of children with protruding ears who hated it! It illustrates the practical uses which textiles can be put to - it may be unsightly (and it's effectiveness questionable) but at least the soft nature of the ribbon would have allowed a degree of comfort.

Though very different in purpose and structure, the ear cap reminded me of the Embroidered Surgical Implant I had seen in the Craft Council's exhibition 'The Power of Making' at the Victoria and Albert Museum in November 2011. The machine embroidery was designed by Peter Butcher and made using suture thread. Placed in a patient's shoulder just under the skin, part of which had been lost, it provided something for the surgeon to stitch the patient's tissue to whilst it healed. That something so beautiful yet simple can make such a difference to someone's life is pretty astounding.


Since studying Sax Shaw I have become a stained glass magpie, stopping to take snaps whenever I see any. This I came across on Maddox Street, between Oxford Street and New Bond Street:
At the time we were walking by, the sun was going down and the lights inside the church allowed us to see the window in it's intended glory, albeit back to front! Whilst in Bath with my parents, I then came across this window at their favourite deli: 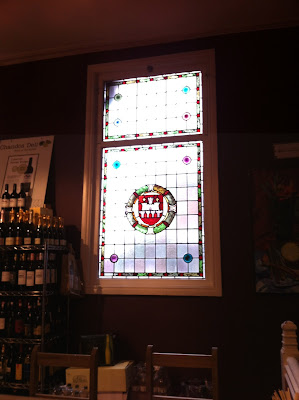 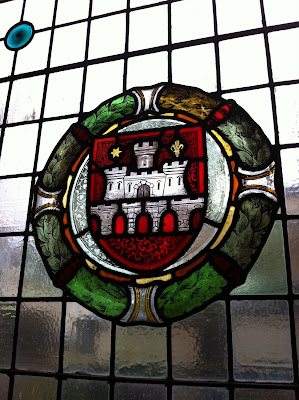 For a final picture, here's our Christmas table. Mum and I got arty with some chocolate coins: 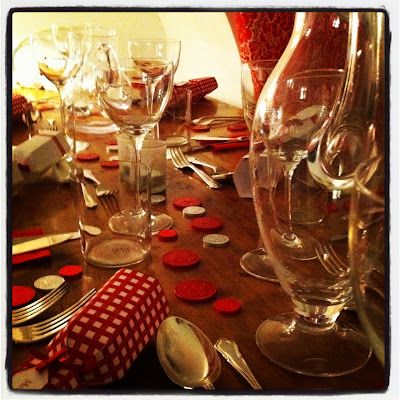 Posted by Francesca Baseby at 11:51 No comments:

I am not one for making personal new year resolutions - they generally involve eating less chocolate and doing more exercise - like many people, I rarely achieve them. But, in the case of my studies, the new year is a good time to sit back and consider what I've achieved, and what I need to do to achieve more. I had intended to use the long break from being at uni (they turn the heating off over the holidays!!!) to get my Sax Shaw presentation, but instead I have spent two weeks hanging out with family, spending time in the flat with Calum (our work schedules rarely match up the rest of the year), do an excessive amount of knitting and eat a lot of food. The result? I am raring to go! So, here are my resolutions: 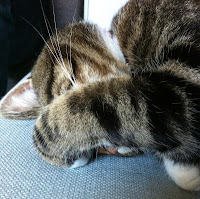 I have always been an early rise, but since beginning my PhD I have gradually become one of the students I never was when I was an undergraduate. No matter what time my alarm goes off, I know there is usually no-one expecting me to be anywhere, so I hit snooze and go back to sleep. But not this year! It's been said so many times that mornings are most productive so as the days get lighter I intend to get up and greet them more readily. I also plan to schedule meetings first thing so that I have no choice but to get up.

2: Keep up with my to-do lists
When I began my PhD, it was quite easy to keep track of the tasks which needed doing, as I had a clear starting point. Now, as my project expands and evolves, I have so many things on the go at once that it can feel overwhelming. Though we all know that cutting things down into bite-size chunks makes life more manageable, the reality is that, when we're in a frenzy or a panic, lists and structure go out the window as we fight fire with fire. Keeping my studies in check can take effort, but it is always worth it.

3: Have a crash-course in weaving
The weavers at Dovecot have offered Elizabeth and I the opportunity to have a weaving lessons and we haven't yet had a chance to take them up on their offer. I am determined to find the time before the centenary exhibition opens in July. I think I know an adequate amount about the weaving process, in order to describe it in my thesis - but nothing can compare to the actual experience of having the yarn in your hands and a loom in front of you. I am sure it will be a valuable contribution to my research.

4: Keep tweeting
I have resisted joining twitter until recently, but just a few weeks in I am hooked. Not only have I enjoyed the constant feed of news and interesting bits and bobs from around the world, but the readership of this blog has already leaped up - Hi there! Many thanks to Mister Tollcross for his support and re-tweets.

5: Leave the blog design alone
This is it for my blog re-designs (for now at least). I have finally found something I'm pretty happy with AND it coordinates with my twitter account. Hooray!
Posted by Francesca Baseby at 13:57 3 comments: