There hasn't been much blog activity recently. Not because my research has ceased or the weavers have stopped weaving, but because I am in my third (and final) year - a time when editing and writing overtake active research.

I have been struggling with this stage - its doesn't involve looking at or feeling tapestries, delving into archives or visiting interesting places. It involves sitting at my desk staring at a screen or hundreds of files day after day. It is at times very solitary and frustrating, but I am also trying to remember how fortunate I am to have the space to think. I remind myself that when I am back at work I will not have such a luxury! 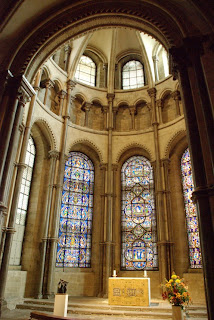 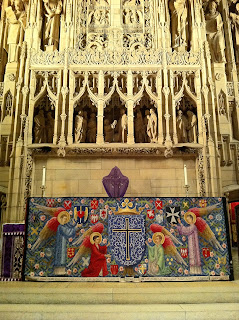 One real benefit of the editing process is that I am beginning to better understand the connections that can be made across my thesis, cutting through the chronological divisions of its chapters. For example, the issues of church decoration that influenced West's design for the Gould Memorial Tapestry are the same ones that Joyce Conwy Evans had to think about in the Canterbury Cathedral Altar Frontal. Both tapestries needed to feature religious iconography, fit in with the surrounding interior design and be visible to a large audience from a distance (both pictured above).

The shadow (or light?) from French tapestry weaving was a constant presence throughout 1945 to 1970 in Dovecot's practice. Immediately after the war French tapestry became popular in Britain thanks to a major exhibition at the Victoria & Albert Museum in 1947. The successful resurgence of contemporary tapestry weaving under the guidance of John Lurcat was one of the influencing factors in Dovecot's decision to collaborative with living artists. Lurcat's influence continued into the 1950s when Sax Shaw was Artistic Director. Shaw adopted the French artist's methods - including the creation of full scale cartoons numbered with the corresponding colours to be used (images above). Tapestry by numbers indeed. By the 1960s, French tapestry was not so much an influence, but a parallel. The Lausanne Biennales, begun in 1962, enabled to Dovecot to promote its tapestries on an international level and develop its communication with international tapestry weavers.

On another note, I have two new reviews on RIO Magazine: Scotland Can Make It! (on at the People's Palace, Glasgow) and the annual Scottish Furniture Makers Association Exhibition. A review of Nuno Japanese Textiles currently on at Dovecot will be up shortly.
Posted by Francesca Baseby at 16:26 No comments: